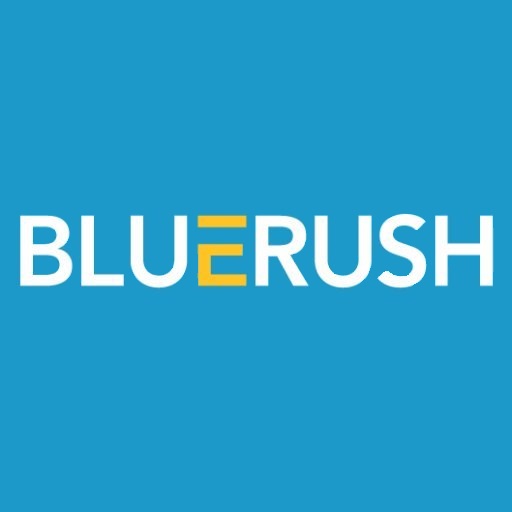 * Including cash raised in the October 2017 private placement 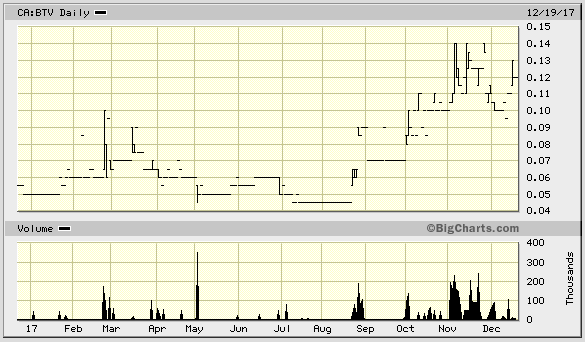 BlueRush Media Group (”BlueRush”) was founded in 2003 and went public on the TSX Venture Exchange in 2007 via a capital pool company (CPC) offering. BlueRush has historically been in the business of providing digital marketing services (DMS), predominantly to customers in the banking industry. DMS include work such as building websites and other online marketing programs. This was a somewhat cyclical business as banking clients went through cycles of bringing this work in-house versus outsourcing. In 2012, management made the decision to develop a few product offerings in order to build a more stable and sustainable business over the long-term by generating recurring revenues from its already impressive client roster. Over the following years, DIGITALREACH and INDIVIDEO were born.

According to the company’s website, ”DIGITALREACH is a content management and fulfillment platform that helps advisors, consultants, and sales teams grow their book of business by simplifying client management.” This product offering is branded in 2 different ways: 1) DIGITALREACH is marketed and sold directly by BlueRush and is used by its clients to push regular content to current and prospective customers; 2) SMARTADVISOR is licensed, marketed and sold by Broadridge Financial Solutions (NYSE: BR / $10B market capitalization) in Canada, and is used for regulatory purposes following the implementation of the CRM2 regulation in Canada. CRM2 is a financial industry-wide regulation that was put in place in early 2017. It requires firms to disclose and report more information to customers. SMARTADVISOR is a tool that helps financial firms meet the requirements of this new regulation. With the 2 versions combined, DIGITALREACH is currently used at TD Bank, Manulife and many other financial institutions by over 75,000 financial advisors.

Again according to the company’s website, ”INDIVIDEO creates personalized videos for each and every customer, provides information relevant throughout their journey, and generates loyalty.” Basically, it allows companies to send videos that are personalized to each customer in their databases. A use case, for example, could be a bank sending its customers videos about how their retirement will look like if they save a given amount of money every month for a given number of years. Or it could be a personalized insurance quote that a representative sends to a prospective customer after their first meeting. The personalized video format is much more appealing to a wide array of customers and can be used in many industries. INDIVIDEO is a very small part of revenues today. It is used by clients such as Allstate Insurance and Groupe Investors. There are many applications for this technology and the company is currently exploring how to properly exploit it.

BlueRush also has developed intellectual property for multiple niche products such as a ”Mortgage Expert” and a ”Retirement Expert”. The Mortgage Expert, for example, is basically a financial calculator that lets a user enter basic information about his mortgage and then shows him what his monthly payment would be at a proposed interest rate. The prospective customer can then seek a mortgage or other financial products from the financial institution sponsoring the calculator. This tool can be sold as online paid content to advertisers in the financial industry, and generates revenues on a CPM (cost per thousand impressions) basis and a revenue share. Although these products don’t generate meaningful revenues currently, based on our discussions with management we believe they present significant revenue potential and provide a lot of free optionality at the current valuation.

To summarize the opportunity on a high level, BlueRush is a turnaround that is transitioning from one-time sales to a recurring revenue model. As we will see later, the company is getting some serious traction on its new product offerings and we believe that the market does not fully appreciate the magnitude of the transition happening here.

Management and Board of Directors

BlueRush was founded in 2003 by Larry Lubin. Larry has extensive experience in sales, software development and financial services. He previously built a company called Fitech that is now part of CGI. Larry and his Fitech team developed many leading applications for financial institutions.

In 2006, Len Smofsky, another successful entrepreneur with a background in visual communications and strategy, joined Larry and the team at BlueRush. Len and Larry formed a partnership to recreate BlueRush with the intent of creating personalized customer experiences using a unique blend of digital media and deep technology capabilities.

In 2012-2013, the duo realized that the way to build for future success was to develop SaaS products, which means selling software on a monthly subscription plan. After a few years of developing new products and after seeing the early commercial traction they were getting, the next step for Larry and Len was to find additional talent and expertise on the sales side.

The major breakthrough in that area happened in August 2017, when BlueRush announced the appointment of Steve Taylor to its board of directors. Steve Taylor has over 25 years of experience in the SaaS, eCommerce and digital media industries. He managed large sales teams in the past and knows how to turn a company like BlueRush into commercial success. Steve was previously the founder and CEO of Resolver Inc., a SaaS-based governance, risk and compliance company that was successfully sold to Klass Capital, a private equity firm, in 2015.

Through a private placement, Steve invested $250,000 into the company and brought along with him a high-profile Canadian technology venture capital firm, Round 13 Capital, for an additional $750,000 investment. Round 13 is led by Bruce Croxon, former dragon on CBC’s Dragons’ Den. The VC firm, which now owns approximately 25% of the company’s outstanding shares and close to 33% on a fully diluted basis, has appointed a director to the board (John Eckert) and is very active in helping the company move forward. BlueRush now has access to Round 13’s large network of successful entrepreneurs and investors, such as the co-founder of Shopify as one example.

Subsequently, in December 2017, Steve Taylor was appointed Chief Executive Officer of the company, replacing Larry Lubin who will remain involved as the President. The turnaround is now underway with a new CEO and a highly strategic investor (Round 13) on board.

Although the company has a long history of not diluting shareholders, it did so in a significant way in October 2017. As explained in the last section, the company was looking for strategic partners to lead the company into its next growth phase, so management made the decision to give up a large equity stake to Steve Taylor, Round 13 Capital and a few other strategic investors to come on board.

Here is an overview of BlueRush’s share structure and insider ownership. It takes into account all shares, warrants and options issued and announced in press releases up to December 13th, 2017. 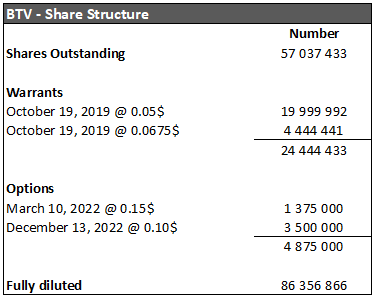 As you can see in the insider ownership table, most of the warrants and options are held by management and insiders (76% actually). The rest is in friendly hands as the last private placement was split between only a handful of strategic investors. As a side note, one of the company’s customers participated in a small way in the private placement. When the customer likes the product so much that he wants to invest in the company, this is something we like to see!

Although it is usually helpful to take a look at past financial results, in BlueRush’s case we are much more interested in the pipeline of new SaaS products than the legacy digital marketing services. For that reason, we will mostly focus on future projections and let readers assess past financial performance on their own.

We often hear that valuing companies is more art than science. Well for BlueRush, it’s a lot of art and little science. Financial data for new products is limited, expenses have been reduced on the services side while new expenses are being added on the SaaS product side, including 5 new sales people and a paid search campaign to accelerate lead generation. There are a lot of moving pieces here, so be careful when doing your due diligence (or relying on our estimates). Nevertheless, here are our projections for FY 2018 and 2019 (note that BlueRush has a fiscal year ending on July 31st): 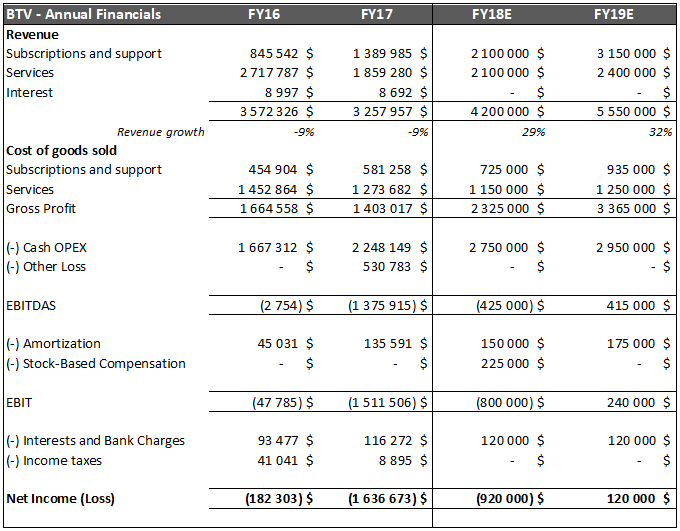 The key assumptions in the above model are the following:

Based on our discussions with management, we believe the company could reach profitability in approximately 18 months, which gets us to Q4 2019 (May-July 2019). However, we wouldn’t expect profitability to be management’s main focus. When a SaaS growth company gets its metrics right (Customer Acquisition Cost lower than the Lifetime Value of a customer, and decent payback period), it is often much more valuable to keep spending and grow faster rather than try to be profitable.

As many of our readers know, profitability (or near profitability) is one of our important investment criteria. BlueRush is thus a company that we wouldn’t typically look at or invest in. What happens here is that we believe so strongly in the new CEO’s vision and in the team he has put in place that we are willing to take a little more risk.

When we evaluate a SaaS business that is not profitable, there are 4 main criteria we play close attention to:

Now let’s get into the valuation. Since many SaaS companies are not profitable, there is no way to value them based on profitability metrics such as P/E or EV/EBITDA. The most common and convenient multiple that is used is a multiple of sales. A 2017 valuation benchmarking study for SaaS companies was published by River Cities Capital Funds, and here is what it shows about public SaaS company valuations: 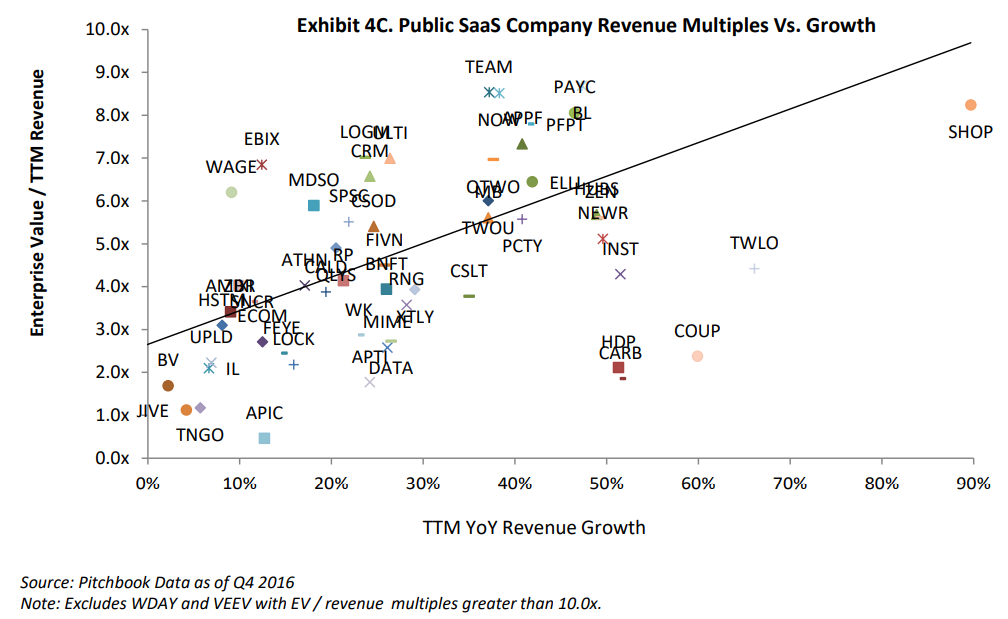 There are a few takeaways from the two exhibits shown above:

If BlueRush is able to achieve the revenue growth targets it has set out, we believe that the recurring revenue multiple should improve from 3.5x to 5.0x in FY19. We see a potential for BlueRush’s shares to go from $0.12 to $0.32, or 167% potential return, over 2 years.

Investing in profitable, or close to profitable companies is one of our golden rules. However, rules are made to be broken sometimes. We believe so much in the team at BlueRush that we are willing to place a bet on management for a few years, and let them create value through substantial revenue growth instead of profits. This is not without risks, but we like our chances when we invest alongside smart money such as former dragon Bruce Croxon!