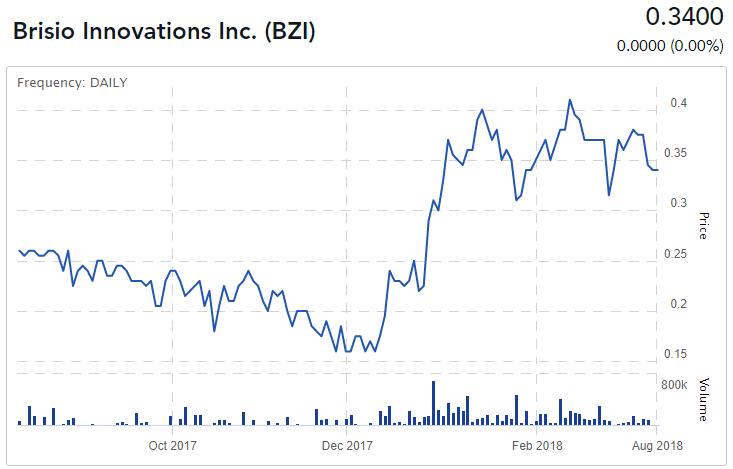 Brisio Innovations is an investment holding company that recently completed a major acquisition. The company invests its capital in companies and opportunities which management believes are undervalued and have potential for significant appreciation. The company makes investments in both public and private markets and focuses on opportunities in a wide variety of industries excluding the resource and resource services sectors. Brisio does not invest on behalf of any third party and it does not offer investment advice.

The company is led by Paul Andreola, a successful Canadian investor and editor of the investment newsletter SmallCap Discoveries.

Until recently, Brisio’s investment thesis was primarily based on CEO Paul Andreola’s stock picking abilities. Indeed, he has a solid track record and we can certainly attest to that since we’ve been following him via SmallCap Discoveries. Also, as of the end of July, Paul is ranked the #1 most prolific member on the MicroCap Club, an investor club renowned for the outstanding quality of its content and members. Paul Andreola’s investment ideas have yielded a total return of 3,553% since he recommended them to the club.

Although Brisio mainly invests in public companies, its business model is difficult to replicate because Brisio often manages to invest in exclusive financings that are not available to everyone (private placements) or in private companies. For this reason, the stock has generally traded at a premium to its book value.

On March 7th, 2018, Brisio took many by surprise by acquiring an entire company, NameSilo, for approximately US $9.5 million. Having traditionally been a passive investor, Brisio would now become an operator. Given this important change of business, the stock was immediately halted and has not resumed trading yet. The stock is expected to resume trading tomorrow, August 9th, 2018, at the market open.

NameSilo is a low-cost provider of domain name registration and management services, and is an ICANN-accredited registrar. NameSilo is a high growth registrar with over 1.85 million domains under management[1], and over 85,000 customers from approximately 160 countries. According to RegistrarOwl.com, which provides domain registrar industry statistics from ICANN, NameSilo is the 5th-fastest growing registrar in the world[2], ahead of household names such as Google, GoDaddy, Alibaba and Tucows.

The company generated revenues of US $11.1 million in 2017, a 61% increase over 2016, with an EBITDA of US $800,000 according to the investor presentation. Its total number of domains under management grew by 65% in 2017, followed by an impressive 52% growth in just seven months in 2018. All of the company’s revenues are recurring and its retention rate is 87%, mainly due to its low prices and outstanding customer service.

The acquisition was financed by Brisio with a private placement for gross proceeds of $3.98 million, as well as borrowings of CA $5 million and US $4.77 million at 8% interest rates. In a press release issued yesterday, Brisio announced that it had satisfied the last condition to close the acquisition, which was the payment of an earn-out bonus of US $2.55 million to former owners of NameSilo. Briso also announced that it had acquired a digital service company to help support the growth of NameSilo in exchange for 18.5% ownership. This means that NameSilo is now 81.5% owned by Brisio and 18.5% owned by minority interests.

Brisio’s management has mentioned the possibility to eventually spin out NameSilo into a separate public entity if it’s in the best interest of shareholders.

Given the limited financial information released about NameSilo so far, we think the most appropriate way to value the business is to use a multiple of sales (price/sales). The first reason is that we don’t know the company’s cost structure or the proportion of its profits that is reinvested to grow more, or even the salaries that executives were paid when the company was private. Therefore, it is very difficult at this point to make in-depth comparisons with competitors. On the other hand, given the high proportion of recurring revenues, we believe that a valuation based on the price/sales ratio is a reasonable technique in this context, as is often the case with SaaS-based companies with a high proportion of recurring revenues.

So far this year (seven months), NameSilo has generated US $11.7 million in sales with a record US $2 million in July[3]. By annualizing the first seven months, we get projected revenues for 2018 of US $20.1 million (CA $26.2 million), an increase of 81% over 2017. The press release also mentions the intention to implement new value-added digital services to generate more revenues from the same customer base, but we think it is too early to include any additional revenue forecasts at this point.

Now, how do we assign a reasonable multiple to our sales projection of CA $26.2 million? Of course, taking a look at publicly-traded peers can help us find that answer. Here is an overview of three peers we’ve found[4]:

Please note that earlier this year, Tucows was targeted by Copperfield Research, a research firm seeking to profit from selling stocks short. After the publication of Copperfield’s report, the stock quickly lost 25% of its value in January before resuming its uptrend in the following months. We believe that partly explains why Tucows appears relatively cheap compared to the other two peers.

In addition to the public comparables, the company Web.com which owns the domain names registrar Register.com announced in June that it would be acquired by a private equity firm for US $2 billion, valuing it at an enterprise-value-to-sales (EV/Sales) ratio of 3.5x.

In light of these observations and the fact that NameSilo is growing faster than all its peers, we believe that a multiple of 2 times sales is appropriate in order to establish a floor value. This represents a large discount to peers, to account for the small size of NameSilo and the current lack of publicly available financial information. With our forecast of $26.2 million in sales in 2018 and a multiple of 2x sales, we get a valuation of $52.4 million for NameSilo, of which 81.5% belongs to Brisio.

We add to that Brisio’s current passive investment portfolio as well as the debt used to finance the NameSilo acquisition, which gives us the following total valuation: 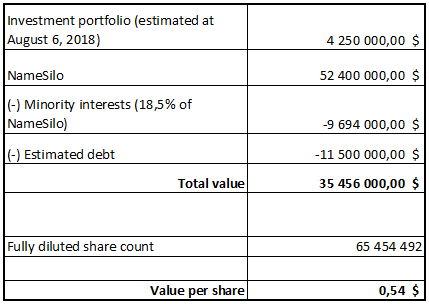 The trading on the stock is expected to resume tomorrow, Thursday August 9th, at the market open. Because the stock has been halted for several months, it is hard to predict at what price it will start trading again. That being said, our estimate of Brisio’s intrinsic value ($0.54 per share) suggests that the increase will be material compared to the last recorded price of $0.34.

Brisio is an unkown and underfollowed company that has just made a major change of business. Given the limited details released about NameSilo so far, it is highly likely that the market will be inefficient in the short-term to assess the fair value of the stock. This is a situation where you have to use incomplete information to come up with your best educated guess. Based on our analysis, we believe that a price of $0.54 per share represents a conservative estimate of the intrinsic value of Brisio and we believe that the stock could represent a great buying opportunity when trading will resume tomorrow.

Decisions as to whether or not to trade a security for the Fund are made exclusively by Rivemont.

This article is neither an offer to sell nor a solicitation of an offer to purchase securities and should not be considered legal, tax, financial or investment advice. Several estimates and assumptions have been used in the writing of this article. Espace MicroCaps does not guarantee the validity of the information presented.

Espace MicroCaps is not responsible for direct or indirect trading losses caused by the information presented on this blog. Everyone is advised to make their own analyzes and inquiries and to consult their own professional advisers with respect to legal, tax, accounting and other matters relating to the acquisition, holding or disposition of an investment.

[2] As at August 6th, 2018. Source: www.registrarowl.com/report_registrar_fastest_growing.php