The company reports its financial results in USD. However, the amounts mentioned in this text are in Canadian dollars (CAD) unless otherwise noted. 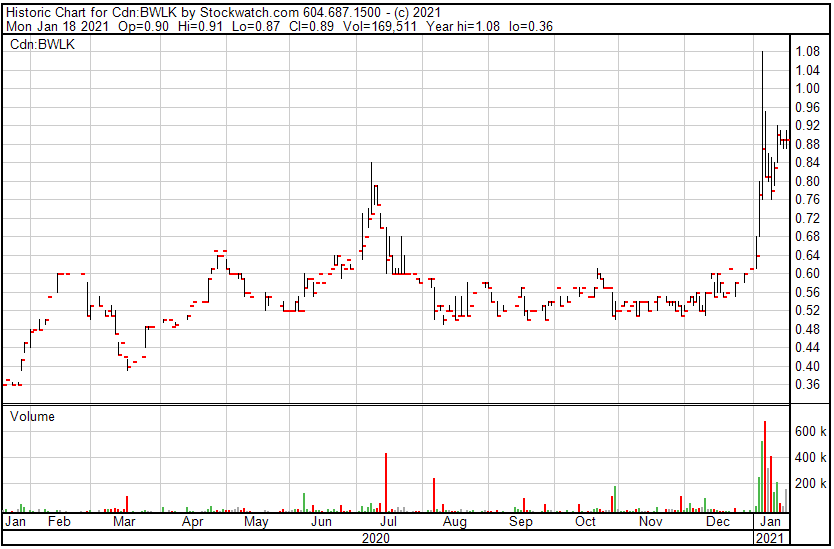 Boardwalktech’s patented digital ledger technology and its unique method of managing vast amounts of structured and unstructured data is the only platform on the market today where multiple parties can effectively work on the same data simultaneously. Boardwalktech can deliver a collaborative purpose-built enterprise information management application on any device or user interface with full integration with enterprise systems of record in a fraction of the time it takes other non-digital ledger technology-based applications.

Boardwalktech is headquartered in Cupertino, California (Silicon Valley), with offices in India and operations in North America.

For a full investor presentation by the CEO, you can watch this webinar: Youtube – Virtus Advisory Webinar Series – Boardwalktech (TSXV: BWLK)

Currently, over 80% of the world’s data is unstructured, which means it is not organized in a predefined manner. Examples of unstructured data are PDF, HTML, Word, and Excel files. Managing and using this information is crucial to help businesses make better and faster decisions.

Today, despite the availability of many business management software such as SAP and Salesforce to organize data, much of business data still ends up in Microsoft Excel.

Some Excel spreadsheets combine data from multiple sources and require the collaboration of numerous users who enter data manually. Executives then use these spreadsheets to make important business decisions.

Unfortunately, these leaders often don’t have all the information they need to make the best decisions possible. Decision-making processes are slower, and this generates additional costs.

For an overview of how the platform works in Excel, the following video offers a short demonstration: Youtube – Secure Contract Management Collaboration

Boardwalktech markets its technology platform using a Software-as-a-Service (SaaS) model (i.e., through a recurring subscription for access to the software in the cloud). The company also generates professional services revenue for implementing and customizing or developing new applications for individual customers.

Since this is enterprise software, the sales cycle is approximately six to nine months, followed by an implementation and training cycle that lasts about six weeks.

Recurring SaaS-type revenues generate gross margins of around 90%, while professional services provide about 50%. Longer-term, Boardwalktech wants to develop channel partners who can take care of sales and implementation, while Boardwalktech focuses solely on technology development and high margin recurring revenue.

The company classifies its growth opportunities into three broad categories:

Boardwalktech currently generates US $3.7M in annual recurring revenue (ARR) and publicly discloses that its sales pipeline is close to US $8M. This pipeline is highly qualified and comprises prospective customers who have shown serious interest in the software. According to management, it is estimated that about 60% of the pipeline ultimately converts to sales on average, suggesting the potential to more than double recurring revenues in the short to medium term.

CEO Andy Duncan is an experienced entrepreneur who founded four technology companies in the past, 3 of which were ultimately sold successfully. Andy joined Boardwalktech in 2007 when the company was looking for a new CEO.

By his own admission, the technology developed by Boardwalktech was far ahead of its time and the market was not ready to embrace it, which is why the company still has such a small revenue base years later. However, with the meteoric growth in the amount of unstructured data in businesses worldwide, and few solutions that meet the precise needs addressed by Boardwalktech, Andy is now seeing the momentum accelerate.

I also had the opportunity to meet the CFO virtually, Charlie Glavin, who appears to be very competent. He has over 25 years of experience in the finance industry, working for public companies, and was involved in over $5 billion in transactions during his career.

Why Does This Opportunity Exist?

Boardwalktech has been public on the TSX Venture since June 2018. At that time, Canada was experiencing a speculative bubble in the blockchain technology and cryptocurrency sector. Boardwalktech, with its blockchain-like Digital Ledger technology, saw an opportunity to raise capital on extremely favorable terms.

Management decided to go public on the Canadian market by raising $10 million at $5.25 per share. As the speculative bubble burst at approximately the same time, Boardwalktech was dragged down by investors who (wrongly) associated the company with cryptocurrencies. The stock quickly lost over 90% of its value.

Despite the drop in the stock price, the company continued to execute its business plan and improve its fundamentals. I think the company is still very poorly understood by investors today, which creates the investment opportunity.

Boardwalktech currently is in a less desirable financial situation than the companies typically profiled on Espace MicroCaps. The company is not generating positive cash flows yet, and its balance sheet includes high-interest debt (US $4.5M at 14.95% interest rate). However, these obstacles are surmountable.

In terms of debt, the lender is SQN Ventures, a venture capital fund that has supported the company for many years. SQN is also a significant shareholder in the company, owning over 20% of the outstanding shares.

On January 7th, Boardwalktech announced a $5M private placement, which was subsequently upsized to $8M due to strong demand. The private placement consists of issuing 11.43 million units at $0.70, each unit being comprised of one share and one-half warrant at $0.90 valid for two years.

This financing is expected to close by the end of January and will allow the company to repay most or all the SQN debt. The company will mostly use the balance to increase investments in sales and marketing.

The debt has been a significant risk in the past, and I think this financing is an important catalyst for the stock.

Revenue growth, however, has been unimpressive in recent years:

While past numbers are far from being exciting, there appears to be an acceleration in the company’s sales pipeline, which portends strong revenue growth to come. In the last quarterly financials press release last November, management already hinted at the growth to come shortly, mentioning that “the Company projects ARR to be over $5 million by Q1-FY22” (which means by April 2021).

With the private placement expected to close shortly, Boardwalktech will also have the resources to hire staff to support this growth.

According to management, an exciting opportunity is shaping up in the banking industry. Banks must put stringent risk reduction and compliance processes in place, which they sometimes struggle to do correctly. As an example, Citigroup recently received a significant sanction for its risk management processes: Citigroup fined $ 400 million for risk management deficiencies. Boardwalktech’s software could fix several issues for Citigroup, making it a potential customer, just like many other banks. 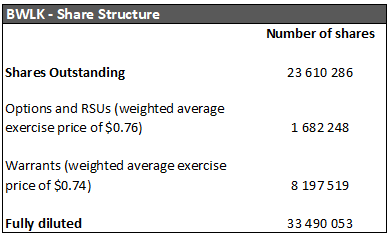 N.B: This table does not consider the private placement currently underway.

Currently, Boardwalktech generates US $3.7M in ARR, resulting in a valuation (at the current price of $0.89) of 6.2x recurring revenue. On total sales (including professional services), the company is valued at 4.7x the expected 2021 revenue. While I cannot say this valuation is cheap based on past growth trends, I think it is very reasonable given the future growth potential.

Based on management’s comment of reaching US $5M in ARR by April, the EV/ARR multiple could quickly go down from the current 6.2x to 4.6x. Let’s then look at the future potential.

As an example, if the company succeeded in converting 60% of its US $8M pipeline into customers, total revenue (most of which is recurring) would increase to about US $9.7M and the valuation would be a meager 2.4x revenue multiple. In such a scenario, I believe that a more realistic multiple for a company with such a growth profile would be anywhere from 6x to 10x revenue. The upside scenario would be a share price of $2.25 to $3.75, or 153% to 321% return from the current price.

With microcaps, everything always takes longer than expected and I could be wrong on the amount of new business the company will get or the timing. That being said, there is room for error, and I believe Boardwalktech could be a great investment even if sales don’t ramp up as much or as quickly as I expect.

Mathieu Martin, the president and sole owner of Espace MicroCaps, is employed by Rivemont Investments (“Rivemont”) as an analyst for the Rivemont MicroCap Fund (the “Fund”).

Mathieu Martin is involved in the decision-making and recommendation process regarding whether the Fund should buy or sell individual securities. Mathieu Martin is also a unitholder of the Fund.

Mathieu Martin does not own Boardwalktech Software (BWLK.V) securities personally.

This article is neither an offer to sell nor a solicitation of an offer to purchase securities and should not be considered legal, tax, financial, or investment advice. Several estimates and assumptions have been used in the writing of this article. Espace MicroCaps does not guarantee the validity of the information presented.

Espace MicroCaps is not responsible for direct or indirect trading losses caused by the information presented on this blog. Everyone is advised to make their own analyses and inquiries and consult their own professional advisers regarding legal, tax, accounting, and other matters relating to the acquisition, holding, or disposition of an investment.