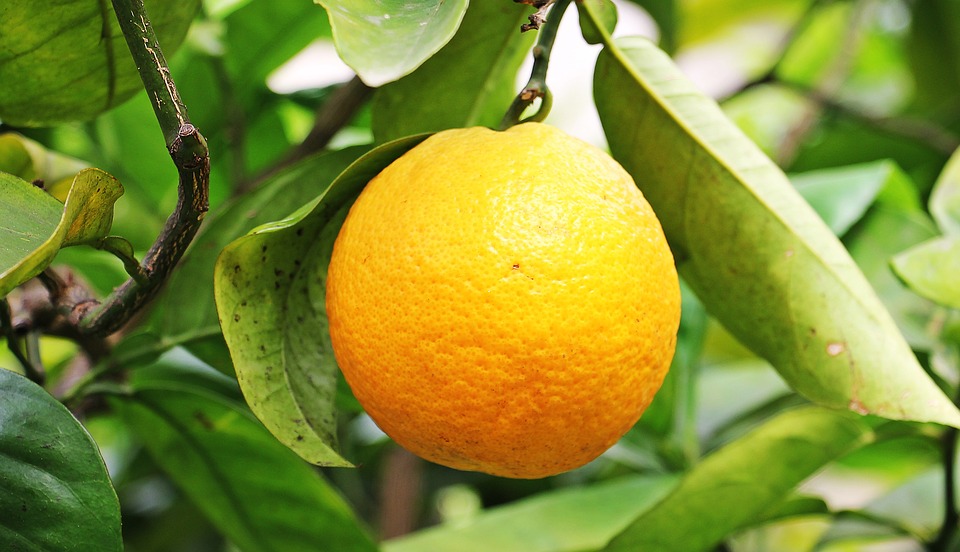 Imaflex was established in 1994 and is a public company since 1999. Their headquarters are in Montreal, Quebec. Focused on the development and manufacturing of innovative solutions for the multi-billion-dollar flexible packaging and agriculture industries. The core business is the manufacturing of plastic film and bags, including metalized plastic film. It is mostly a commodity business with low margins.

Imaflex is profitable, has a track record of growing revenues and management expects continued margin improvements. The company developed two revolutionary agricultural films, Shine N’ Ripe XL and ADVASEAL (not yet commercialized), whose sales could start to accelerate in a very significant manner. The first material order for Shine N’ Ripe XL was announced on December 7th, 2016, and we have reasons to believe that potential large orders could follow.

Here is a quick overview of the portfolio of products that Imaflex manufactures: 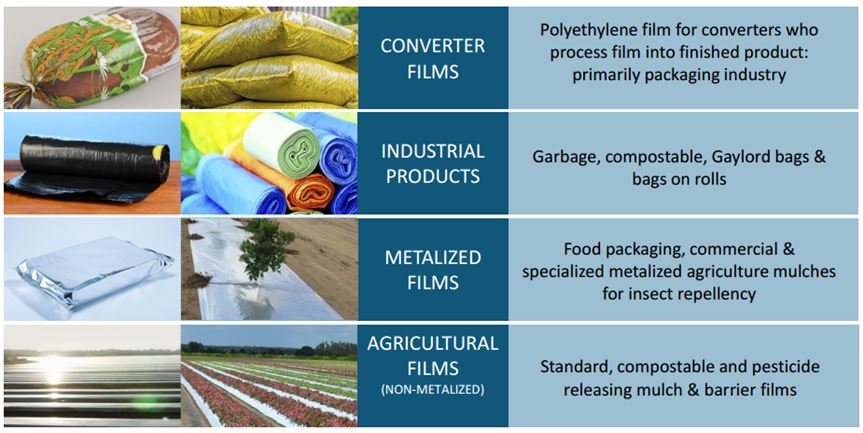 Roughly 90% of the company’s business is derived from the manufacturing and sale of polyethylene film for the packaging industry. Agriculture sales account for the other 10%.

Imaflex operates three manufacturing facilities, two of which are in the province of Quebec and one in North Carolina. The core business has been growing revenues at a CAGR of 10% from 2011 to 2015 and is up 5% in the first nine months of 2016 over the same period last year. Margins have been tampered in recent years due largely to the development of new agriculture products and weakness in its US operations, which are being addressed. Imaflex also incurred costs associated with patent registrations around the world for ADVASEAL.

The business currently generates 4-5% EBITDA margins, but we expect that percentage to grow as sales of new products are ramping up and the company continues to strengthen its core business. In its prime years, before the financial crisis, Imaflex generated gross margins north of 20% and EBITDA margins of approximately 15%.

Imaflex has a strong management team with lots of industry experience. Joe Abbandonato, CEO, has spent his whole life in the polyethylene industry (40+ years experience). He’s assisted by his brother Tony, Production Director, and Gerry Phelps, VP Operations, who is a chemical engineer. Those are the three founders of the company and they own a significant equity position in the company (~47% of the shares outstanding).

Management has been extremely shareholder-friendly in the past. The company closed several financings at premiums to market ranging from 55% to 90%. In 2011, the CEO cut his salary from $204k per year to $158k and never increased it since then. His equity position in the company is worth roughly 50 times his annual salary so he is very incentivized to make the business a success.

Imaflex has a strong R&D department that, in our opinion, is very underappreciated. The company developed two products, Shine N’ Ripe XL and ADVASEAL (not yet commercialized), that have massive market potential and this is what gets us excited:

Shine N’ Ripe XL is a metalized heavy duty film developed specifically for the citrus market to fight against citrus greening by solar reflection. It has a proprietary anti-corrosion coating that extends the life of the film to 3+ years versus traditional metalized films.

Citrus greening (or huanglongbing – HLB) is a bacterial disease transmitted by an insect called the Asian Citrus Psyllid (ACP) and it is currently regarded as one of the most significant threats to global commercial and sustainable citrus production. In Brazil, the largest producing country of oranges in the world, it was estimated that ~17% of citrus trees were affected by the disease in 2016 according to an estimate by Fundecitrus[1]. In Florida[2], from 2012 to 2016, citrus production dropped by 55% largely due to citrus greening.

HLB now occurs worldwide in all major citrus growing regions except the Mediterranean and Australia. Growers rely principally on insecticidal control of the ACP vector, but it is insufﬁcient even for young trees which are most susceptible to the disease. Affected trees start producing fruits that can no longer be commercialized due to their weird size, green colour and sour taste. They typically die after 4-5 years. There is currently no cure for citrus greening.

A University of Florida study[3] showed that the addition of mulch to the standard insecticide regime resulted in a 44 percent increase in yield, which would more than cover the cost of the mulch. The Citrus Research and Development Foundation (CRDF), a non-profit corporation related to the University of Florida, also conducted a study on the use of Shine N’ Ripe XL, which is outlined in an article called Greater growth, less psyllids in the Citrus Industry Magazine January 2016 issue. Here’s an excerpt of the first paragraph:

“In the nearly 30 years that Bob Adair has been researching citrus, he has never seen a treatment produce such dramatic results on tree growth as metallized reflective mulch (MRM). Adair, executive director of the Florida Research Center for Agricultural Sustainability (FlaRes), says his project with MRM “represents the most significant citrus tree growth study that I have been a part of since I began citrus research in 1986.” 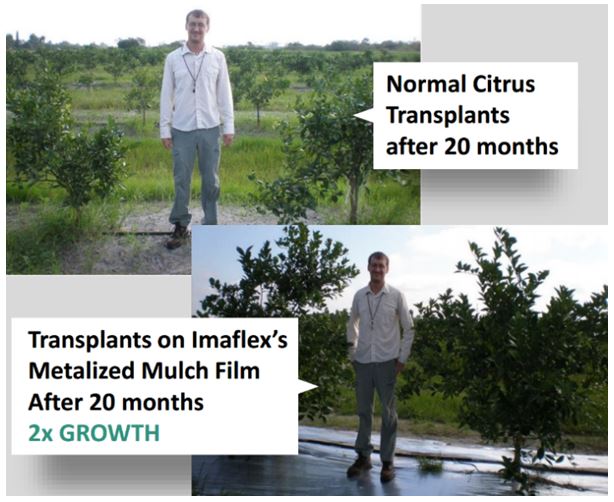 Shine ‘N Ripe XL is solving a critical unmet need and the economical benefits could be quite substantial for Imaflex and their clients.

That said, Imaflex has been at this for quite a while, but they finally got their first major order for the product recently from one of the largest citrus producer in the world: Imaflex receives significant mulch film order. This validates and de-risks the product significantly in our opinion.

Where the story gets interesting is that our research led us to this article: The Coca-Cola Company commits $2 billion to support planting of 25,000 acres of new orange groves in Florida. Here’s the last sentence of the article:

“In 2010, The Coca-Cola Company and Cutrale Citrus Juices pledged $1.5M each to the University of Florida’s Citrus Research and Development Foundation. This grant furthers critical research to help address Huanglongbing disease, commonly known as citrus greening.”

In fact, since citrus greening appeared in Florida, more than $176 million in state, federal and grower funds have been spent on the search for solutions[4]. And some are impatient for results like Coca-Cola. We think that if one of the largest citrus producers in the world goes ahead with a $1M purchase of Shine N’ Ripe XL only a few months after the University of Florida study results are out, we might be on the verge of massive industry adoption.

In our most recent discussion with the CEO, we were further encouraged by the validation this order brings and the unique benefits Shine N’ Ripe XL offers to growers worldwide. Mr. Abbbandonato also mentioned that gross margins on this product should be significantly higher than the 10-15% of the core business.

Per a press release dated October 15, 2014, Imaflex estimates that the immediate addressable market for Shine N’ Ripe XL is upward of 21,500 acres, requiring 12 million pounds of film, which translates into $45-million in potential revenue. We have yet to compute a reliable estimate of total addressable market (TAM) as, in addition to new citrus plants, growers are also using Shine N’ Ripe XL on established citrus groves.

For further reading on the citrus industry and citrus greening disease, here is an excellent paper on the subject: Squeeze Out, The truth behind the orange juice business

ADVASEAL is a patented multi-layered film for the agricultural industry, capable of releasing active ingredients (pesticides, fungicides and/or herbicides) in a safe and precise manner. The current approach by farmers to control pests and weeds is to spray chemicals, which is expensive and environmentally unfriendly because a lot of those chemicals end up in the air and are wasted. ADVASEAL incorporates a revolutionary technology where the chemicals are applied as a coating on the film and are released when they get in contact with water in the soil.  This reduces dramatically the quantity of chemicals needed and ensures a precise dosage.

ADVASEAL was initially jointly developed with Bayer (€86B market capitalization) and is patent protected in the top 20 major vegetable producing countries until 2032. Imaflex bought back the rights from Bayer at the end of 2014 to pursue the commercialization of the technology. Lab trials have been done with positive results to date, and it is estimated that the product can save growers between $200 and $800 per acre in chemicals, depending on the crop grown. The total addressable market in the US alone for ADVASEAL mulch film is estimated to be US $750M.

Imaflex is currently working to design a customized coating equipment in order to be able to produce ADVASEAL on a larger scale.

As you can see in the table above, Imaflex has been steadily growing revenues and has shown a large improvement in normalized EBITDA for the trailing twelve months (TTM) period. This is due to a few things: improvements in the US operations, higher utilization of the production capacity, better product mix and sound financial controls.

With an enterprise value of $33.92M, the company is currently trading at an EV/EBITDA multiple of 8.4x while the Tangible Book Value (TBV) stands at roughly $0.40 per share. If we were to ignore Shine ‘N Ripe XL and ADVASEAL opportunities, it would still be a reasonable valuation for the company given its strong fundamentals in a recession-resistant and growing multi-billion-dollar industry. Hence, we believe the market isn’t assigning any value to the future potential of the two revolutionary agricultural films described above.

We are buying Imaflex as a free call option on two revolutionary products: Shine ‘N Ripe XL and ADVASEAL. Both products could be worth much more than the current valuation of the company, which is supported by strong fundamentals. Imaflex is profitable, growing revenues 10% per year, has a good capital structure with high insider ownership, a validated and de-risked pipeline gaining sales momentum and, best of all, is still undiscovered.